I’ve spent some time learning about operating systems and I believe my programming has benefitted from it. I think I have reached a point where I can provide some help to others who want to learn the basics of how their operating system works with their processor, so I’m planning to write a series about it. I’m new to this, so feel free to email me with corrections or suggestions.

In this post, I’ll write a short bootloader. My introduction to this topic came from Operating Systems: From 0 to 1 [1], which provides a sample bootloader that does not work (on my Ubuntu 20.04 Intel system, with a current version of NASM). I’ll do something similar to what is outlined in chapter 7.

The purpose of a bootloader is to load the operating system into memory and execute it. The bootloader is the first executable code that is loaded into RAM from the storage media that is available to your computer, such as a hard disk or floppy. This post will describe the floppy approach: this is simpler as we do not need to consider disk partitions, but has the drawback that less storage is available [6].

When an Intel processor starts, it is initially in 16-bit real mode, which emulates the operation of the 8086 architecture for legacy reasons [2]. This has a couple of important implications for a bootloader program:

The bootloader program below will execute a BIOS interrupt service routine to load a placeholder kernel program from elsewhere on the floppy disk. It will use interrupt 13 with ah = 0x02 (ah is the upper 8 bits of the ax register. It’s also worth noting that hexadecimal instructions in documentation such as the Intel manual or the interrupt list are denoted either with a 0x prefix or a h suffix. So we could say ah = 0x02 or ah = 02h and still be referring to the same 8-bit binary number 0000 0010).

The documentation for the interrupt can be found here. Here are the relevant parts:

It’s worth looking at a diagram of a floppy disk to understand what the parameters mean (source): 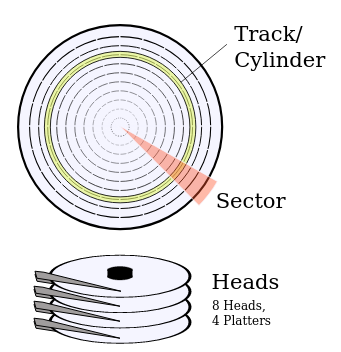 A 512 byte sector is the smallest quantity that can be read into memory at one time. A track is a ring of 18 sectors on the disk. Floppy disks have two sides: drive 0 refers to the needle used to read or write the top, while drive 1 is for the bottom. After all sectors from track 0, head 0 have been read, the next sequence of data comes from track 0, head 1 - on the bottom of the disk [1].

The bootloader program can only fill a single 512-byte sector because it is read from track 0, sector 0, head 0 by the BIOS program, stored in ROM. The program will load the “kernel” from sector 1, track 0 and execute it:

There are a couple of things worth pointing out. xor bx, bx clears the bx register to zero, so that when es is left shifted by 4 bits and added to bx, the value is 0x500. Aside from the tricky 8086 memory addressing, it is mostly straightforward: the program from chapter 7 of Operating Systems: From 0 to 1 tries to perform a far jump with jmp 0x50:0x0 which induces a jump to 0x00 using the q35 chipset with QEMU 4.2.1 (Debian 1:4.2-3ubuntu6.23) and NASM 2.14.02. I’ll look into this further in another post by working backwards from the bytes generated by NASM to determine which instruction is being produced (GDB’s disassembly can be inconsistent, and was not clear here). In the meantime, placing the address in a register (bx) has solved the issue.

Notice that the value placed in al is the number of sectors to load - you can imagine how you might increase this to load a larger operating system, rather than just the second sector. Most modern operating systems will not fit on a floppy disk, but the procedure for hard disks is similar: a 512-byte sector is read from the desired partition [6, p. 116].

All of the code for this project is hosted here with a Makefile. I’ll go through the steps for compiling and debugging the program, so we can verify the code is working. It may be useful to have NASM >= 2.14 and QEMU >= 4.2 installed to match these steps exactly. I’ve included a sample kernel program with the following code:

This does not accomplish much, but the instructions are unique so we can step through in the debugger and determine if the kernel has been loaded into memory and set to execute.

To compile, we need to convert the assembly instructions into bytes that are interpretable by the processor:

We need to construct a floppy disk image to provide to QEMU:

Lastly, we need to write the bootloader to the first sector (seek=0) and the kernel to the second (seek=1). The conv=notrunc option ensures that the floppy disk remains 1.44 MB in size. This is the amount of storage available on a standard floppy (two heads * 80 tracks per head * 18 sectors per track * 512 bytes per sector = 1.44MB). See this for additional explanation.

We can verify that all of our code up to the end of the kernel program was written to the image using hd which displays the content of the binary and decodes any ASCII:

We can see that the marker message from kernel.asm was included. We inserted the marker using the db command, which is an assembler directive, not an instruction that your processor understands: it means “define byte” (similarly, we have dw and dd for defining words and double words respectively). Conveniently, you do not need to type db before every character in a string: each character is converted to its ASCII representation by the assembler.

We can execute our code on QEMU with the following:

The -S option ensures that the machine will not start until we have entered GDB and entered continue. QEMU will greet you with a black screen until you connect with GDB using target remote localhost:26000.

The bootloader will be loaded at 0x7c00 in memory by the BIOS. We set a breakpoint there and type c to continue to where the bootloader has been loaded. To get more insight into the current state of the registers and what instructions are being executed, you can type layout reg at the prompt:

You can see the first instruction of our bootloader, where we clear the interrupt flag, is at the current breakpoint. Step through all of the interrupt parameters using the ni command until you reach the int instruction. You can type set disassembly-flavor intel to get the familiar assembly format from the .asm files we compiled using NASM.

You can use ni to step over function calls, but this does not work for interrupt service routines. To step over without getting stuck in a long routine, set a breakpoint at the following instruction and continue with c.

You may notice when stepping through the code in GDB that mov bx, 0x500 becomes mov ebx,0xea0500. I think this is because GDB does not know we are simulating a 16-bit processor mode. It might also be helped by compiling our assembly in ELF format and supplying GDB with some debugging information [7]. Regardless, the above instruction sets the lower 16 bits of bx to 0x0500 as desired. Type ni once more to hit the jmp bx command. You can see that the kernel has been loaded into memory at 0x500:

These are the two placeholder mov commands from our “kernel,” (mov ax, 0x0101 and mov ax, 0x0333) so we have succeeded in loading it from the floppy!

If any of the general purpose assembly instructions were confusing, you can refer to [7] or [8]. The former has useful discussion of memory addressing and processor modes; the latter covers more ground and has some discussion of floating point coprocessor instructions. The Intel instruction reference [5] may also be useful for information about rarer instructions like cli.

Several tutorials exist for writing your own operating system, but most cover few topics. Since writing an OS is a big project and my goal is to understand the fundamentals, future posts will describe the steps that were most difficult for me. I do not plan to cover the bulk of the operating system code in my posts, so I’ll refer to more detailed resources with the specifics of what I learned from them or what code I used. Linus took a similar approach when writing Linux: many remnants of MINIX are still visible in the source code (compare MINIX ioctls and Linux ioctls, for example).

Hopefully this helped to give you a better understanding of one of the ways that your operating system interfaces with hardware, via the BIOS. Here are a few additional teaching operating systems which might be useful resources:

You are welcome to to email me with corrections or suggestions, as I’m still new to operating systems development. Citations: